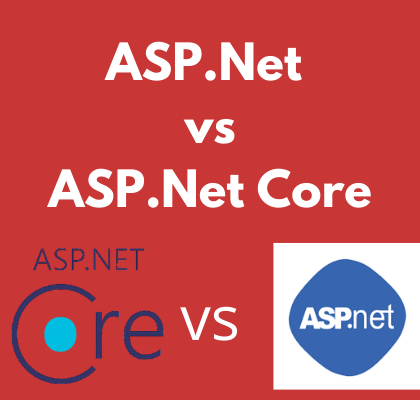 Hello everybody, and welcome to mycodebit today, we are talking about the differences between ASP.NET vs ASP.NET Core, so both platforms ASP.NET and ASP.NET Core, are derived from .NET. Both Microsoft-built frameworks are simple in usage.

Keep reading to get the answers to the most common questions about ASP.NET and ASP.NET Core.

The same ASP.NET was the first version of the web-adapted .NET framework, but ASP.NET Core is a newer, more improved version. A .NET framework itself underwent the same transformation so now there are two tools .NET Core and the .NET framework.

ASP.NET Core and ASP.NET read further to see if the core is better. Let’s zoom in on both frameworks technical characteristics

ASP.NET is based on HTTP protocol for requests and communication. ASP.NET shares most of its key components with .NET. Among them, all the support of multiple languages, libraries, as ASP.NET provides reusable code components, interfaces, classes, and values for .NET based web development and language runtime among the main benefits of asp.net,

Now we are going to discuss deeply ASP.NET Core, Here we have a diagram that can elaborate ASP.NET Core more efficiently than words.

The newer version runs on the .NET core. It is a modular web framework. ASP.NET core is available open-source and can be executed not only on windows but also on Linux and Mac, it is a great option for cloud and microservices development.

ASP.NET Core can be hosted in Docker, HTTP.SYS, Apache, Kestrel, IIS, Nginx, and other systems so it’s a great option for cloud and microservices development especially well suited for enterprise-level projects.

Overall the major advantage of ASP.NET is the maturity of the ecosystem. ASP.NET Core, on the other hand, stands out with its improved interface and cross-platform compatibility, so as we promised at the beginning, we will share use cases for each of them.

ASP.NET Core is a better choice for new project development. We also use it for enterprise projects for its better isolation and modularity. If your project has many dependencies, asp.net core can help you solve the issues faster.

Do you see the point in using asp.net?

Share your thoughts in the comments section. Actually, in some cases, the older asp.net can work better. We still use it when supporting projects with a codebase that’s developed over a long time, and in case the team isn’t ready for migration because of higher priority tasks. So the best practice is to use asp.net core since it’s a new version that presents more opportunities to the team.