What Makes These Ugly NFTs So Valuable to Collectors 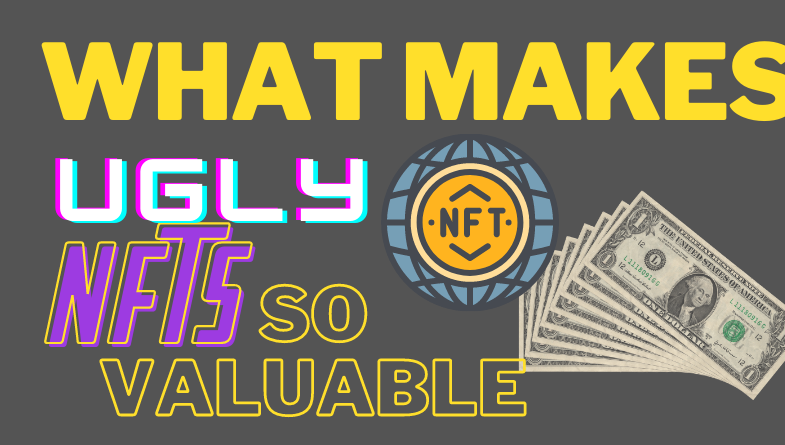 Some ugly Nfts have been criticized for not having the best-looking. For example, vice came out and straight-up asked why nft art looks so bad. The financial times claimed, “the real problem with nfts is that they’re ugly”. Even though I will grant that some of these collections aren’t going to win any award for their aesthetic beauty. But the counterpoint is, that all art is subjective. Even a lot of these collections aren’t trying to be fine art. They’re trying to go viral or to have a coolness factor that you might get from comic book characters or video games. To understand ugly NFTs we have to take a collection as an example and discuss that.

Related: 7 Simple Ways: How To Get Free NFTs

Just to get to the bottom of it I did go to Twitter and researched. There’s a new collection that everybody’s going crazy for. This one’s getting harder to defend against the critics because this collection is truly unapologetically hideous and the collection is called goblintown. It’s a set of profile pics that were released earlier previous month for free. Which showcases high fantasy-style creatures that emerged from goblintown memes.

Goblintown is supposed to be a state of mind. It’s a meme that people share when they’re down bad and the markets are melting down around them. Finally, we have a visual component that looks something like this and guess what, people are getting absolutely rich off of them. At the time of this post, these nfts have a floor price of 2.9 Eth.

So let’s talk about why goblins have gotten so popular despite being as ugly. A lot of collections miss some key ingredients like storytelling and fun and when we look at the goblins those are the exact two things that they’re emphasizing storytelling and fun. For example, most creators would use social media to talk about what they’re building and how they’re gonna bring value to the community. The goblin team uses social media to just enhance the world-building Twitter posts. Just gave more glimpses of this weird universe that they were creating and their weird language was consistent across all their posts.

They even stayed in character during their twitter spaces which go on for hours with grown men making goblin noises. Yes, that’s weird. Yes, it’s kind of cringe but it’s also brilliant marketing because it had everyone talking about it. More importantly, it was a fun break from the norm, especially at a time when we’re on the brink of a deep recession and people are generally not having a great time.

Ugly NFTs have a new type of media:

I think there’s a new type of media emerging that combines platforms like Twitter with NFTs and it creates a new type of storytelling. People are spending more time on these platforms. Creators are finding ways to combine platforms like Twitter microsites, and digital assets like NFTs to raise the stakes and give the people ownership in this new media. For example, cyberbrokers is a collection that uses microsites. These units drive their storytelling and they use quests to slowly build up the lore of a dystopian futuristic world. Goblins are just another evolution of this idea and they’re leaning into the mystery and giving less away than most other projects.

Ugly NFTs have a mystery:

I think most people are buying goblins because they realize that something is being built. There isn’t a published road map and they realize that these creators are unfolding this story in real-time. They’re very good at leveraging social media to gather and drive attention so the takeaway. From this point is that you do not need a stated roadmap to build a brand and capture attention. In fact, having a roadmap for some people is actually an anti-signal right now. Founders should just be more creative in how they tell stories. I wouldn’t be surprised if goblintown ushers us into an era where we’re gonna see a lot more guerrilla marketing.

Now the final point we have to talk about with goblins is of course the art right. Yeah, I think it’s ugly but I also recognize what they’re going for. It’s purposely ugly because that’s the vibe and this has resulted in the meme feedback loop. Where the more the price goes up.

People got angry because something this ugly shouldn’t be doing this well. And this makes it funnier to buy and drives the price up even more. When it comes to the internet the fastest way to make something go viral is simply, to try to stop it.

Related: Don’t Be Fooled by These NFT Scams: Tips to Avoid