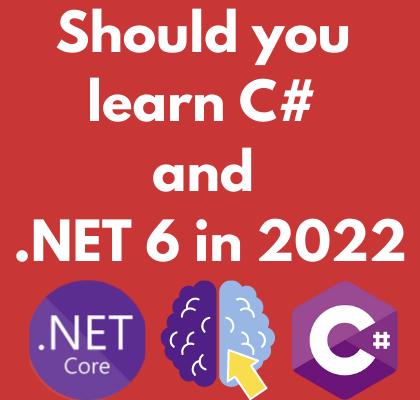 Today, we will talk about C# and .NET 6, and we believe it will be red hot in 2022. so if you see a lot about Microsoft, they are in the annual release cycles of .NET now.

If you don’t know much about .NET, let me give you a brief history lesson. Before, .NET had a version called 4.5, but under that, there were multiple frameworks. They did various things like building mobile apps, desktop apps, and web apps, and all these frameworks were kind of disparate and not well joined together. So Microsoft decided to do a couple of things. Number one, they wanted to join all of these frameworks, and they had the aspiration of making it cross-platform, meaning that it would run on Linux and windows. They also wanted to make it open-source so that the community could contribute to .NET. So in .NET Core came into existence, which turned into .NET 5, gave us the cross-platform for web only. Finally, they bring in the mobile and the desktop and put that into .NET 6. So far, this year, we will have one .NET, which means one .NET framework that you can build web, mobile, desktop, gaming, AI, and much more. This gives us one .NET that you can build almost anything now.

The other exciting thing to you as a developer is not only is .NET going to be released every 12 months but also C#, which is the primary language. Most people use to write down in applications, whether that’s Web, Desktop, Mobile or Windows the new release of C# gives us many features that will help developers. Microsoft itself is trying to make you the most productive and most in-demand developer by pushing out this tooling, the languages, and the frameworks. Even the hosting platform with azure to make sure that companies far and wide, large and small, adopt .NET as that they’re going to run their enterprise on, which means more jobs and more opportunities for you.

The other thing about .NET is it’s also open-source, so you’ll see a lot of open source community projects that can enhance .NET or add features that you may not be aware of. We also have the broad support of third-party libraries that are easy to bring in through git, a lot of packages, and things if something isn’t necessarily included that you need; the library is vast and does almost anything that you possibly could imagine to bring into your project.

Usually, when I write these .NET Posts, I have to talk about two things, mobile and desktop, as two separate sections, but with .NET 6 that is no longer the case now you can build windows, Mac os, desktop, Ios, and Android applications with the same code base and that’s called .Net MAUI. Now, this has industry and is in an uproar, and people are flocking to .NET 6 because they see unparalleled capabilities than any other platform.

Yes, other platforms allow you to build cross-platform mobile, but not all of them at this scale allow you to build almost any platform with one codebase. So no longer have to decide if you’re going to build a Windows app or a Mac os app or an IOS iPhone app or an Android app. You build the app and then compile it to the application platform of your choice, which is very exciting.

A lot of this comes from the tooling that was in Xamarin in the older version of the .NET framework called .NET mono, and now they have positioned that into one .NET while making sure that win-forms and things like WPF all work with one code base and that’s the exciting thing for us. Because if you know .NET MAUI, you can build apps for anything. .NET MAUI will be hot in 2022, so what does all of this mean to you as a developer.

I want you to think about it if you know .NET, then you can build a web, desktop, and with .NET, you can also build mobile apps, it makes a cross-functional ability to tackle almost any type of project. Just simply because you’ve invested your time in learning .NET and C# and all the frameworks associated with that, but this is the other thing.

Microsoft also has the vision of making sure that you have the best tooling support. So one of the things that are being released this year is a brand new version of visual studio, and for the first time, it will be in 64-bit. So when you’re looking at .NET 6, you’re also going to get a brand new visual studio that’ll be faster and more performant.

Now the one thing that’s very important that you need to understand from .NET 5 and .NET 6 is this ASP.NET is cross-platform, and that means that you can run this on any host that you want, so even if you’re building your indie project and you don’t have a lot of money for hosting you can put it on a cheaper Linux host, and that wasn’t necessarily true in the past, and you can do that with or without a container which is exciting in fact. So don’t believe that if you adopt .NET that you’re tied to windows that isn’t the case anymore.

So .NET coming out every 12 months allows you to jump in at any time, and my suggestion is you need to jump in this year because there’s a lot of things going on.

So let’s talk about the two areas that I think will be red-hot in 2022. one of the things I want to talk about is web development. We still believe that full-stack web development is the most in-demand job in the united states; we expect that trend to continue through 2022. When looking at .NET, you’re looking at a technology called ASP.NET, which allows you to build full-stack web applications with  MVC or Razor pages. Both are similar technologies, but they do have many differences; but in general, these render the page or the form on the server, so we had all server-side rendering, and then that form is posted back to the front end. We think this is a very scalable, fast, and easy-to-build technology that a lot of people will start new projects on and have a lot of maintenance work as well. If you know MVC or you know Razor pages, you’re going to be well-positioned for 2021 and 2022.

The other way that will be beneficial for you to learn in 2022 is using service-based architecture or back-end service REStful services that you can build inside of .NET. We call this web API; now, you write these REStful services with C#. This could be a standard monolithic service or a microservice.

You’ll use the same technologies to build backend services. It takes a lot of things from MVC. You still have a controller, but it just doesn’t render a view. It pushes data to the front end now; typically, we’re using these to build things like single-page applications. This means if you’re a ReactJS, VueJs, or Angular developer and you’re looking to upskill. Which I think is learning web API. You can still use the same front-end framework with ASP.NET Web APIs that you want to use.

These are very popular Javascript frameworks that are in demand today. But when we talk to customers in the consulting company, we see a definite trend where people are moving away from things of Node.JS and implementing web ASP.NET API, and there could be many reasons for this if you look at the ASP.NET core. It was the fastest framework or the fastest popular framework today with over 7 million requests per second, which was over 10 times faster than Node.JS.

So I think many enterprises may be seeing pure scalability and speed benefits of .NET, and they’re migrating their projects over to that now.

Please think about what other companies are spending the amount of time and resources on building out tooling, platforms, languages, and hosting platforms like Microsoft; no other company is spending this amount of time to make you the most productive and well-established developer in the world. Microsoft is also making sure that all of their tooling languages and platforms are appealing to customers like enterprise companies that means if they adopt these platforms, they’re going to be looking for developers who know how to build things on these platforms and that’s going to be you because you’re going to learn .NET this year and push your career to that next level in 2022. Thank you for reading. Visit Mycodebit.com for .net core and .net tutorial.

i want to be a dotnet developer.
what thing should learn in 2022