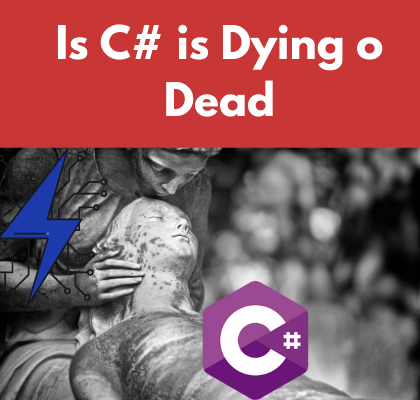 C# came out in 2002 so it’s really not old if you look at Java, JavaScript, PHP, and Python all of which are much older languages don’t mean that c-sharp isn’t mature though.

It just means that it’s actually a young language in terms of the other ones out there that you think about. It’s also a lot cooler than you probably think.

So C# isn’t dying because it is built and maintained by Microsoft. Microsoft has a large investment into making sure c-sharp is the predominant language used today.

So they spent two billion dollars in marketing and trying to get developers onto this new platform. It’s also based inside the .Net framework. So if you know that the .Net framework is extremely popular among a lot of developers. So if C# dies or if it is dying.

There wouldn’t be 14,000 openings in the US right now and if you look at junior developers, it’s twenty-nine hundred today. Now you can compare that to Ruby, JavaScript, and all of those.

So C# gives you the number of jobs that you’re looking forward to breaking in and if there are more openings that means there are more opportunities for you to present your skills and get that first job as a software developer.

I also can use C# to build games using the Unity game engine by far it’s the most popular game engine for game developers. If you’re trying to learn your craft owner or launch your own game Unity is pretty much the way to go and you have to learn C# to do that. So it’s got you covered on enterprise desktop developer, Enterprise web dev, and if you want to build games.

You also can do integrations which are web services or web API, these endpoints that you see people consume data or consume services a lot of those are also written with C# and allows you to build interconnected services or microservices so it’s very well-versed and very generalized.

The number of things that you can do and when you say can I do that with Ruby or can I do that with PHP the answers will be maybe and maybe not but for C# it’s covered all platforms all things and in all places and that makes you super valuable and marketable in the marketplace.

So let’s talk about the other terms that have a lot of aspiring developers confused and that term is the enterprise. Now the enterprise isn’t the spaceship and Star Trek what we’re talking about is large established businesses that generate millions of millions of dollars in revenue and they’re hiring developers because as you’re probably well aware that IT is really driving all of the business forward so whether you’re talking about a big bank or infrastructure provider or something like that, all of these people are running their businesses on .Net. These types of companies are doing cutting-edge things at scale multiple times and things that you use every day are built upon C# and .NET and so that means that there are way more opportunities for you if you know it.

I also run a consultancy. Companies call us and ask us to build something or maintain it or fix it and all of that work is in .Net and C# as well as the startup. I’m very familiar with not only the demand of C# but also the power of the frameworks and the things and types of things you can build with it.

They also did the study last year and they found out, C# devs again were hired way faster than any other boot camp graduates with similar skills, in fact, C# was that common denominator to getting you hired, and if we look back what I talked about earlier. We look at the number of jobs that are open specifically 2,900 Junior jobs today across the United States.

C# is being pushed into all platforms and that could be a desktop, web, games, services, and everywhere. C#is being pushed into everywhere because it’s backed by one of the largest corporations on the face of the planet and so you should learn C# because it gives you the best opportunity to break in and it keeps you employed as you move out through your career in the future. So I hope this helps and good luck and keep going.

Thank you very much for reading this post. Visit Mycodebit.com for .net core and .net tutorial.