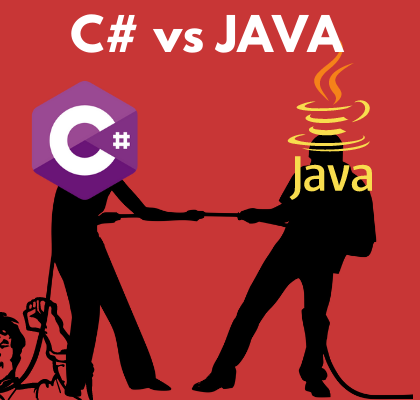 C# vs Java is always compared because both are object-oriented programming languages. Now let’s have a look at C# and JAVA.

Anders Hejlsberg designed C# at Microsoft in 2000. It was approved later in 2002 and 2003. C# was introduced with .NET Framework and Visual Studio. The name “C sharp” was inspired by the musical notation whereby a sharp symbol indicates a semitone higher in pitch.

But before we even start talking about languages and syntax, we have to ask ourselves why C#?

Yeah. Choosing a language is really important and one of the things. What I love most about C# is the beautiful syntax. It’s all about that syntactic sugar. So you don’t need to understand everything about the language right now, but when you want to scale up your designs and create some great architecture, C# is a good choice for that. Definitely. You don’t have to memorize all the little details right.

Now and you also have a whole ecosystem that you can use. So if you find something that you want to do in C#, you can probably do it.

What can I build with C#?

Definitely. So you might just be making a website or a console app right now. But if you went to scale that up sometime in the future, take it mobile, go AI, use Machine Learning, something like that, C# can grow with you.

Yeah. It’s one language for lots of things whether it’s a Raspberry Pi, or an Xbox game, or a website, or just a little console app to print out some text. There are really no limits to what you can do with C#.

James Gosling invented JAVA at Sun Microsystems (which has since been acquired by Oracle) in 1991 and released in 1995.

JAVA is an object-oriented, multi-platform, and network-centric programming language that is

used in a distributed environment on the internet. It comprises an execution engine, a compiler, and a collection of libraries. It is a high-level language that is easy to understand. The rules and syntax of Java are based on C and C++. Java is fast, secure, and reliable.

Java is popularly used in the console, GUI, web, mobile applications, game development, and embedded systems. Apart from these Java is also used to develop software for devices.

Why C# vs JAVA always compared?

C# and Java are always compared because both are object-oriented programming languages and statically-typed. And both have similar syntax and “curly braces”

Where to use C# and Java:

C# vs. Java performance is a hot topic of debate between software engineers.

According to benchmarks around the web, C# performs better overall. It has a shorter response time, besides taking up less CPU load. Java also has high performance. Both C# and Java supports multithreading architecture.

Do not hesitate to comment below. MYCODEBIT team will try to respond ASAP.