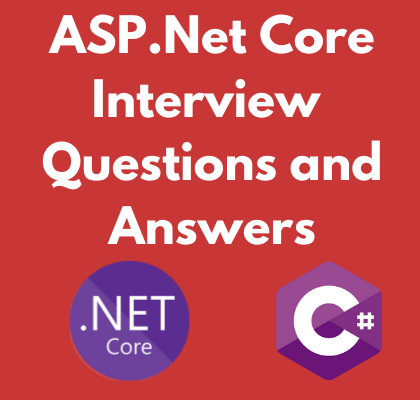 ASP. NET Core is a new version Of ASP.NET and it is open source. It is not an upgraded version Of ASP.NET it’s completely rewritten. It is cross-platform, supporting Windows, macOS, and Linux, and can be used in devices, clouds, and scenarios.

It can work with both .NET Core and .net framework via the .NET standard framework. It is best suitable for developing cloud-based such as web applications, mobile applications, IoT applications. Command-line supports to create, build and run the application.

2. What are the features/characteristics provided by ASP.NET core?

3. What is dependency injection?

4. What is the role of Startup class?

5. What is the role of ConfigureServices and Configure method?

6. What is wwwroot folder in ASP.NET Core?

8. What’s the difference between .NET Core Framework and .NET Standard?

Transient objects are created for every request (when requested).

The service can be added as Transient using the AddTransient method of IServiceCollection.

This lifetime can be used in stateless service and it is a way to add lightweight service.

Scoped objects are the same within a request, but different across different requests.

ASP.NET Core will create and share an instance of the service per request to the application.

It will create a new instance in the new request.

The service can be added as scoped using an AddScoped method of IServiceCollection.

Singleton objects are created the first time they’re requested (or when ConfigureServices is run and an instance is specified with the service registration).

The service can be added as a singleton using the AddSingleton method of IServiceCollection.

13. What are the various JSON files available in ASP.NET Core?

Following JSON files are available in the ASP.NET Core

There are two types Of touting supported by ASP.NET Core.

15. How to enable Session in ASP.NET Core?

Thank you for reading. Visit Mycodebit.com for .net core and .net tutorial.